Meeting of Belarusian delegation with the Head of the Hague Registry

The meeting of Belarusian delegation with the Head of the Hague Registry Mr. Grégoire Bisson was held, during which the issues of accession of the Republic of Belarus to the Hague system of international registration of industrial designs were discussed. In particular, practical aspects of national seminar on industrial designs to be held in Minsk on November were discussed.

Representatives of Belarus expressed their interest to cover the issues of functioning of the three systems in relation to industrial designs, namely, international, regional and national systems, within the framework of the seminar.

During the meeting on implementation of the WIPO ePCT system with Mr. Natsume, Senior Director of the PCT Legal and International Affairs Department, concrete steps for further implementation of this service in the work of the patent office were outlined. An agreement was reached on a series of training sessions for experts of NCIP. 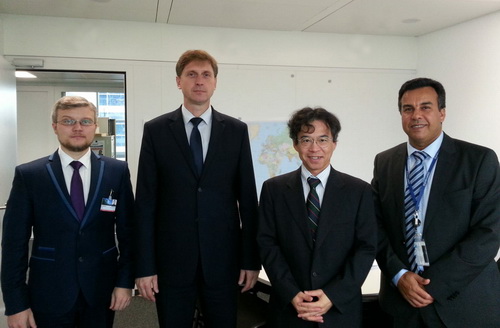 As for the WIPO Summer School project in Belarus, the Belarusian side received support for the implementation of this project in 2020 during the meeting with representatives of the WIPO Academy. It is assumed that in our country WIPO Summer School will be implemented by the State Committee on Science and Technology of the Republic of Belarus and the National Center of Intellectual Property jointly with the National Academy of Sciences of Belarus.