The Director General of the National Center of Intellectual Property Uladzimir Rabavolau delivered a report at the Forum of Regions of Belarus and Russia. As part of the section “Improving the interaction of Russia and Belarus on the implementation of joint programs and scientific and technical projects under international treaties” the Head of the Office spoke about topical issues of legal regulation of cooperation between the two countries in the intellectual property (IP) field. 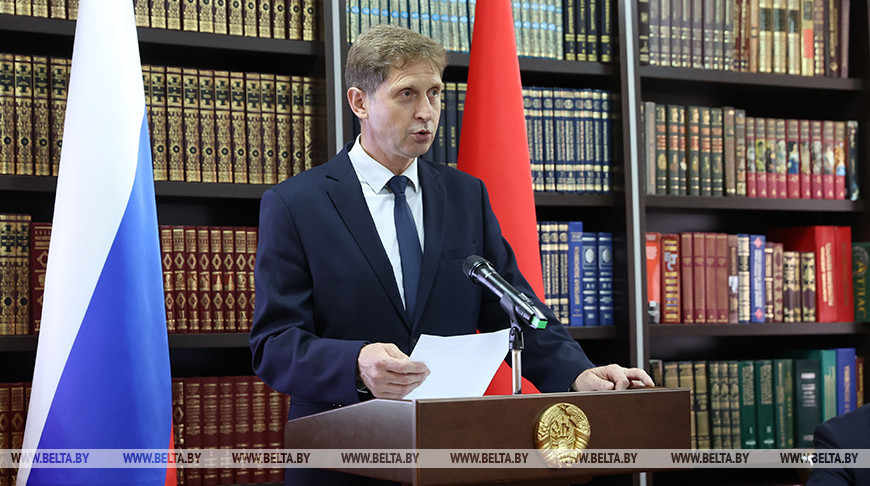 In his speech, he noted that this cooperation is carried out within the framework of several international treaties in the IP field, which allows national applicants to obtain legal protection of industrial property rights on the territory of the states parties to such treaties under the simplified procedure and with less financial costs.

Uladzimir Rabavolau highlighted the fact that Belarus and Russia actively cooperate and support each other at the platforms provided by such international organizations, as the World Intellectual Property Organization, the Commonwealth of Independent States, the Eurasian Economic Union and the Eurasian Patent Organization.

In addition, there is a high level of interaction between the IP Offices of Belarus and Russia.

Summing up his report, the head of the Belarusian IP Office emphasized that both parties are driven by one goal of building an effective IP system as one of the necessary mechanisms for ensuring innovative development.

The 8th Forum of the Regions of Russia and Belarus is held from June 29 to July 1. The main events are organized in video conferencing mode due to the pandemic restrictions. The theme of the current forum is scientific and technical cooperation in the digitalization era, which acquires a special meaning due to importance of creating a single scientific and technological space in the integration process of the Russian Federation and the Republic of Belarus.